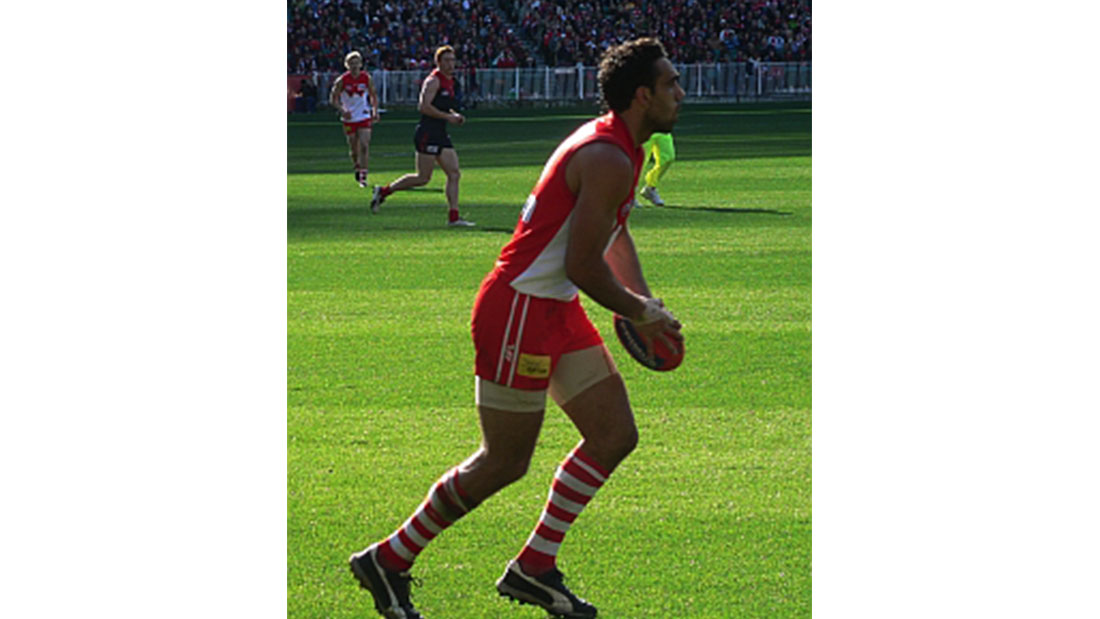 The repeated booing of AFL footballer and former Australian of the year, Adam Goodes, shines the light on racism in Australia.  While his treatment has been trivialised by some it is blatantly disproportionate to the treatment metered out to other players.

Victorian Premier Daniel Andrews has come out strongly saying that football fan’s behaviour constitutes racism.  He has called on other leaders to stop mincing their words and recognise the issue for what it is.

Adam Goodes has indicated that he won’t play this weekend and is taking indefinite leave. Coming from someone who played through a grand final with a torn knee ligament that’s significant. Goodes is clearly hurt. Public behaviour and commentary has impacted him in a way that physical injury was unable to. Many fear this may signal the end of the Brownlow medallist’s illustrious career.

What will it take for Australians to recognise the pain of racisim? It’s not just agonising for Goodes but for all people of colour who witness and are subjected to this behaviour.

For many Indigenous youth Goodes is a role model. His well-earned rise to the top of his field has been a source of hope and inspiration for others. How are they to make sense of his appalling treatment? What does it convey about their own prospects?

Some commentators argue that Goodes has bought this upon himself. He has spoken out against racial vilification. On and off the field Goodes came out earlier this year describing Australia Day as Invasion Day. Although it is a sentiment shared by many Aboriginal & Torres Strait Islanders it confronted some Australians.

Adam Goodes has used his high profile in an effort to raise awareness of Indigenous issues. Like many footballers, he calls it like he sees it. Yet the public seems to have more sympathy for the activism demonstrated by Australian of the Year, Rosemary Batty who speaks out against family violence, than Goode’s efforts to draw attention to the plight of Indigenours Australians. Why is that? Is it that women make up half of the population? Is it because more people have witnessed and been personally affected by family violence? With Aboriginals making up 3% of the population, they are indeed a minority.

A broader dialogue is taking place about the recognition of Indigenous Australians in the constitution. It’s an important issue. Today there is an even more immediate question staring us in the face. Are we able to recognise the voice of Adam Goodes and others like him? Can we appreciate the unique experience of Aboriginal colleagues in our workplaces or the reality for Indigenous members in our community?

It’s time we wake up to the dynamics that play out when members of marginalised communities take a stand. Society tends to punish them harshly when they do.

While calling for behaviour change the West Australian Premier Colin Barnett pointed the finger at Goodes, accusing him of provocative behaviour when he reacted to his vilification with an Aboriginal war dance. It shouldn’t surprise us when someone who’s subjected to public expressions of disdain and hatred pushes back. That he does so in ways that affirm his cultural identity is also hardly surprising.

The fact that we take affront at this reflects our cultural myopia and prejudice. Unfortunately these incidents are seized on as an example of Goode’s ‘otherness’. His behaviour under duress is used rhetorically to justify racist attitudes. It’s a no win game.

Understanding conflict and its escalation is core to my work. Whilst racism is a form of discrimination, its creates a systemic conflict for those affected and those who allow it to continue. With this in mind, I want to challenge the careless accusation that Goode’s behaviour has been excessive. Typically when an individual feels put down, unfairly treated or repressed they push back. Let’s face it, very few people are able to absorb injustice indefinitely. Nor should they. When those who’ve endured relentless racism, sexism or homophobia, do retaliate they are often reacting to a lifetime of oppression. Sometimes the response can seem excessive if viewed in the context of a single incident. But it’s rarely a single incident: It’s a pattern over time. Those of us in the mainstream need to understand this dynamic before commenting on individuals attempts to defend themselves.

Goode’s attempts to stand up in the face of racist behaviour are not only understandable, but a relief given his role as a leader in the sporting community.

In Goode’s case we see one individual out on the field subject to the heckling of hundreds and perhaps thousands of people. That’s hardly fair play. In facts it’s crowd abuse.

Mob mentalities are powerful. It’s been suggested that many people don’t know why they’re booing. In future, given the current public debate, that’s a defence few people will be able to argue.

When an individual is being bullied, whether on the sports ground or in the school yard, one of the most powerful interventions is for bystanders to step in to interrupt the behaviour. Finally we’re seeing sports people around the country come to Goodes defence. Richmond and Western Bulldog players will wear AFL Dreamtime jerseys this weekend, while Indigenous and non-Indigenous NRL players intend to perform Aboriginal dances to show their support.

Racism is not something that people of colour should be left to challenge alone. They have a hard enough time merely surviving it. And as we have seen society tends to punish them harshly when they do.

AFL Chief Executive Gillon McLachlan has called on members of the public to play an active role in stopping racial motivated harassment by fellow football fans. If you spot what looks like racism in sport, why not turn to the heckler near you and ask them to ‘give the player a fair go.’

So how about setting the tone. Why not become an influencer next time you go to the game?

Reflections
When have you witnessed racist or bullying behaviour?  Have you ever experienced it?
What was its impact?
What led you to conclude it was racially motivated? What were the signals?
How did you respond?