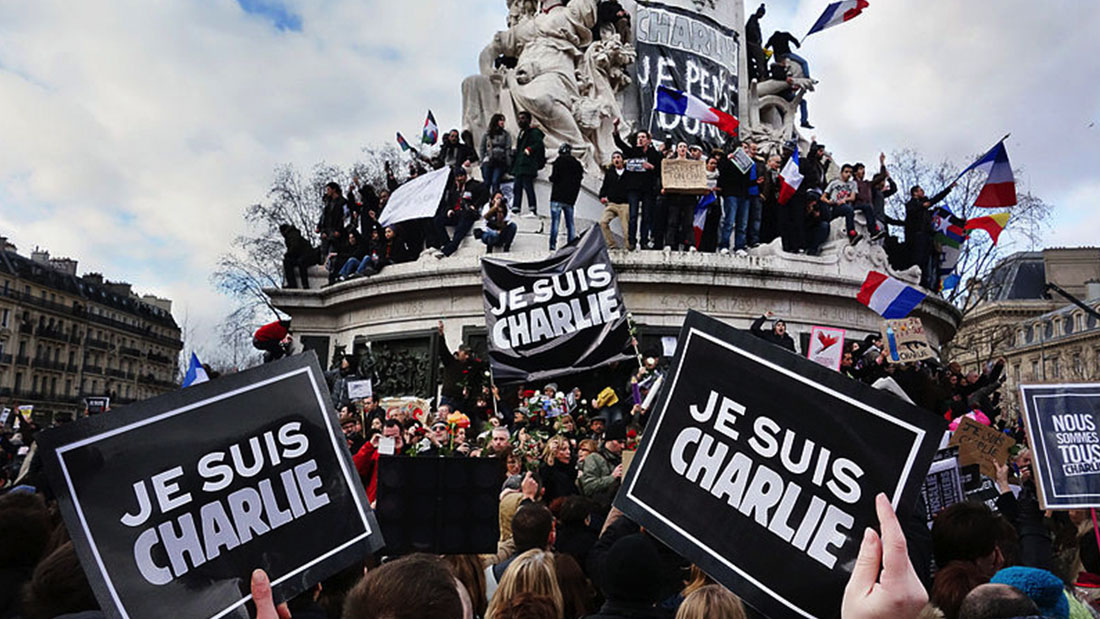 I’ve just returned from an extended stay in Provence where the outrage in the wake of this year’s terrorist attack is still palpable. As I left our local baker Phillipe’s store each morning, arms laden with croissants and tarts, I walked past a simple handwritten sign his window “Je suis Charlie.”

Shocked from their malaise, thousands of French citizens took to the streets earlier this year, responding to the murder of the editor and staff of Charlie Hebdo and many others who were simply in the wrong place at the wrong time.

As my partner, Jean-Marc, is French, we followed events closely and frequently dicussed the issue with family and friends over the days that followed. For the French it was both a tragic and a mobilising time. United in the cry “Je suis Charlie” French citizens felt a sense of fraternity many described as exhilarating. Finding their voice, they were able to reconnect with the sense of defiance and power that in 1789 earnt the French populace its liberty.

“Je suis Charlie ..” The power of empathy, of understanding another’s suffering is core to our humanity. Putting ourselves in another’s position builds understanding. Deep empathy is an important response to the horror of war and violence. That same empathy can also spur our protective instincts and cause us to reach out in order to ease pain. It can also promote division when our empathy is one-sided. I’ve witnessed the same phenomenon in workplaces when whole teams become embroiled in a conflict and sides are taken.

It is a powerful thing to feel united. It averts the sense of vulnerability that terrorism and other acts of violence commonly aim to create. A sense of solidarity can be a soothing balm in the face of life’s uncertainty however, it can also blind us. We risk turning into a mob drunk on a sense of connection, certainty or righteousness that is usually lacking in our lives.

We are witnessing the rise of neo-fascism with the Golden Dawn in Greece. Hate based crimes against African Americans are reaching a new threshold in the USA. In Australia and elsewhere there has been a disturbing rise in anti-Muslim sentiment.

At the time of the French protests I remember how uneasy I felt. While these acts of empathy were powerful, they hadn’t gone far enough. Most of us empathise readily with the victims of violence. But can we also recognise within ourselves the one who is capable of aggression? Can we recognise when we cross another’s boundaries? And if so, can we acknowledge the hurt this causes on the other side?

Another question that plagues me is whether we recognise when we indirectly, by virtue of our own extreme polarisation spur others to retaliate, effectively inciting them to violence.

When I returned from Europe to Australia, I was immediately struck by how boldly a public campaign of vilification was being waged against members of the Muslim community. The tone of public debate was shifting. For the first time I heard leaders of Muslim communities being publically attacked for not doing enough. In the face of the situation, no one has a simple answer for what seemed unfair. Rather than the message from the top being one of mutual problem solving and working together, blame and finger pointing was setting in. Thankfully this tone is recently starting to shift.

Governments well understand that their odds of being re-elected are higher when a climate of fear exists. Many governments internationally are now feeding these divisions. It’s a disgraceful practice that not only lacks integrity, but is a dangerous game with high human and social costs.

What must it be like for citizens who represent ethnic minorities to see themselves manipulated and used in this way? How can they be expected to fight the threat of extremism on the one front and deliberate misinformation, sterotyping and vilification fuelled by racism on the other? What are we doing not only to our fellow citizens, but in the long run to ourselves? Surely we understand these tactics must backfire. And when they do, who will we blame?

If “Je suis Charlie” was possible, what about “Je suis Cherif, Ulrike, Zaky, Martin or Farid… any one of the disengaged youth at risk of being pulled into extremism. Whether it be Daesh, white supremacist groups or even outlaw bikie gangs. Unless we understand the forces that lead to extremism we remain vulnerable and are likely to be taken by surprise.

So whilst it’s easy to identify as the victim. The questions that really interests me is, “How am I also part of the problem?“,

Coupled with this are other questions that need be addressed.

How have I become polarised? Am I isolated in the way I think about and view this situation?

What voices and propaganda am I exposed to? How do I engage with this information?

And finally: What action am I taking? Is it helping or aggravating the situation? What outcome am I working toward?

When we can answer such questions with unflinching honesty, rather than simply projecting our own power and potential for violence onto others, I will feel more confident about peace in the world and in our local communities.

In future posts I will further explore our tendency to adopt a one-sided view in conflict situations.

Meanwhile, if promoting diversity, addressing marginalisation and deep democracy is important to you, you may be interested to learn more about Worldwork.

Worldwork is a facilitation method for bringing out marginalised voices in an effort to create understanding and new insights into complex issues or entrenched conflicts. In History Is Not In The Past I discussed the application of Worldwork to address cross-cultural tensions, violence and the aftermath of war. We introduce this facilitation method in our intensive advanced facilitator & OD training program.

For now let me leave you with a few more questions.

*What movements or causes are you drawn to that give you a sense of solidarity and power?

* What is important about that sense of solidarity? What does it allow you to do or feel that you don’t usually access in your life?

* If you had easier access to this sense of power and certainty how might you use it? What would you do that you currently hold back from?

* If used unconsciously, what are the risks associated with it?